“Wherever he saw a hole he always wanted
to know the depth of it. To him this was important.”
― Jules Verne, Journey to the Center of the Earth

I was recently at my 8 year old son’s baseball game. In front of where I was sitting was a rather large hole, maybe 10-12 inches in diameter and quite deep. I noticed the hole when I almost stepped in it. Many of the adults around me also noticed it. There were murmurs of safety concerns coming from various adults in the area.

Playing around the bleachers was a group of young children, mostly siblings of the baseball players. It didn’t take long for them to discover the hole. Almost instantly, they were all drawn to it. Soon a collective exploration started to take place among the children, whose ages ranged from 1-5 years old. They started filling the hole with various natural items including sticks, grass, and dandelions. They worked as a team adding items to fill it up. At one point a young boy started adding dried leaves. An older girl said “no, we don’t put leaves in the hole” and thus started classifying whaich nature items could go in, and which items were inappropriate to be added. The children were engaged with the hole for the rest of the baseball game.

To the adults, the hole was a safety hazard, but to the children it was a chance to interact with nature. They were engaging with nature – this was a level of engagement we try to create as teachers. Next time you are outside, notice what your children are doing. What part of nature is fascinating to them? How can you facilitated their exploration? So next time you see a hole, look at it through the eyes of a child. 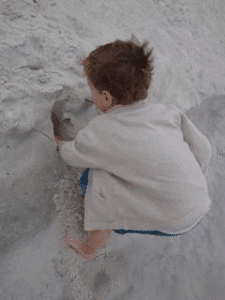